An Introduction to Slide Plates

Reining horses and those competing in other cattle events often wear slide plates. These specialized hind shoes allow them to slide while reducing joint stress. 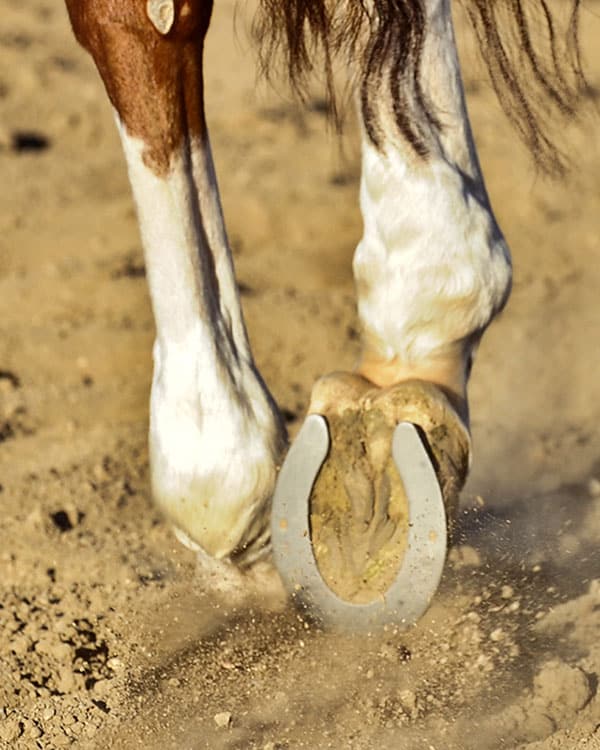 Slide plates aren’t just for reining horses who need them to complete stunning sliding stops. Team ropers and cow horse and ranch riding competitors use this specialized hind shoe to enhance a horse’s stop and ease the pounding his body takes in a hard stop.

A shoe that digs into the ground throws the horse off balance and creates a jerking motion that is hard on the horse’s stifle and hocks. In contrast, the slide plate’s lack of traction reduces friction as the horse stops. Slide plates are wider and longer than traditional shoes. Some taper from front to back, while others are the same width the entire length of the shoe.

“The biggest thing to keep in mind when deciding to put slide plates on your horse is to consider how long the slider will be so that it matches your performance needs and lifestyle as far as turnout,” said Jessica Carter-Arnold, DVM, Dipl. ACVS, of Oklahoma Equine Hospital.

The length and width of a slide plate determine how much glide a horse gets when he stops hard. Texas farrier Matt Anderson shoes for countless top-level reining horse trainers. When he shoes a horse that’s never worn them before, he starts with the smallest width possible, ¾”. This gives the horse a chance to get used to the feel of a slide without scaring itself. After one shoeing cycle, Anderson steps the horse up to 7/8″ if the client is looking for a bigger stop. The largest he said he’d ever use is 1 inch.

“If it gets any bigger than that it can be dangerous, and the horse can actually lose traction when he’s pushing off his back feet,” Anderson said.

Where reining is popular, farriers have expertise with slide plates, but that may not be the case everywhere.

Some might add “stoppers” or removable screws called corks. Carter-Arnold explains that cow horse competitors like this option. The stopper adds traction as needed and can be removed for the reining phase of competition. Anderson said the biggest shoeing issue he sees with sliding plates is when farriers don’t rasp the nailheads. “They need to be rasped smooth to the same level of the shoe,” he said.

The key to earning points in the rundown and stop of a reining pattern or turning a horse on the fence in cow horse events is having a horse that runs without hesitation, willingly drops his hindquarters, and is  free and loose in the front end as he slides along. Nailheads that aren’t flush with the shoe create resistance. That friction can discourage a horse’s “try” in a stop and impact his desire to stop hard.

Horses can wear slide plates when turned out, but Anderson cautions it can increase the risk of injury to other horses in group turnout. Any hind shoes can injure a horse that gets kicked, but because slide plates are larger than traditional shoes, they create greater surface area upon impact.

Carter-Arnold recommends basing turnout decisions on the size of a slider. Horses wearing the largest slide plates are typically stalled with supervised turnout so they don’t slip and slide outside, risking falls and injury. A horse can be turned out with a shorter slider, but she recommends doing so in a dry pen to prevent the horse from slipping while running or playing.

Keeping these considerations in mind, “it’s pretty easy to maintain a horse in sliders, and they can ease the pounding on a horse’s legs,” she said.