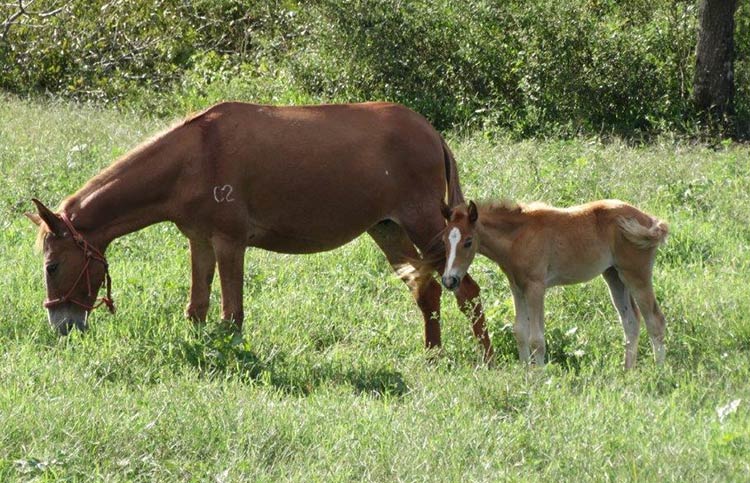 “Mules can host the embryo of a mare, gestate normally, produce a good amount of milk, and have an incredible maternal instinct and ability,” said Eduardo L. Gastal, DVM, MS, PhD, Professor in the Department of Animal Science, Food and Nutrition at Southern Illinois University, in Carbondale.

“It’s curious for a hybrid that doesn’t usually have offspring to be such a good mother like this,” Gastal said. “It’s an amazing thing to see.”

In their study, Gastal and his fellow researchers transferred 8-day-old horse embryos into two groups of recipients: seven cyclic horse mares and seven acyclic mules. For the horse recipients, the scientists synthetically synchronized the reproductive cycle of the recipient with the donor mare. For mules, however, the research team prepared them with hormonal treatments (estrogen and progestogen). They then followed the pregnancies with ultrasound and blood sampling.

They found pregnancies in mares and mules were “strikingly similar,” with comparable ultrasound findings. In both recipient groups, the embryonic vesicle was visible at day 10, and its diameter and growth rate up to day 60 were equivalent. The scientists could see the embryo itself on Day 20 in both groups and noted similar size measurements for the embryos. The only differences were slight: The embryonic vesicle stopped movement within the uterus (“fixation day”) a day earlier in mules than in mares, and the detection of a heartbeat and the allantoic sac (which helps the embryo exchange gases and handle liquid waste) occured one day later in mules.

Pregnancy and early embryonic loss rates were also about the same—although it took about twice as many attempts to get the mules pregnant, Gastal said.

The researchers also found similar blood hormone levels (equine chorionic gonadotropin, or eCG, and progesterone) profile trends in both groups, but the mules had higher eCG, said Gastal. However, it’s important to keep in mind that the mules received weekly progesterone shots until day 120 of pregnancy, or until 30 days before foaling, as part of another evaluation.

“A lot of mules even have a very strong protective instinct and act jealous when they have a baby,” he said.

Hardy and resistant, mules offer a “nice alternative” when high-quality recipient horse mares are scarce, especially in countries like the United States, Brazil, and Argentina where demand is high. “Mules are rustic and adapt well to different environments, so this makes them an interesting subject,” said Gastal.

If you are interested in adopting this horse, please submit an Adoption Inquiry via AAE's website; No texts please: allaboutequine…
12/05/2022
Total views: 293