Routine hoof care is an important aspect of owning and riding horses. Without proper trimming and care, a horse’s hooves might deteriorate, leading to unsafe conditions for both the horse and rider. So how often are your horses’ hooves trimmed and/or shod?

We posed this question to our readers in last week’s online poll. More than 1,700 people responded, and we’ve tallied the results! 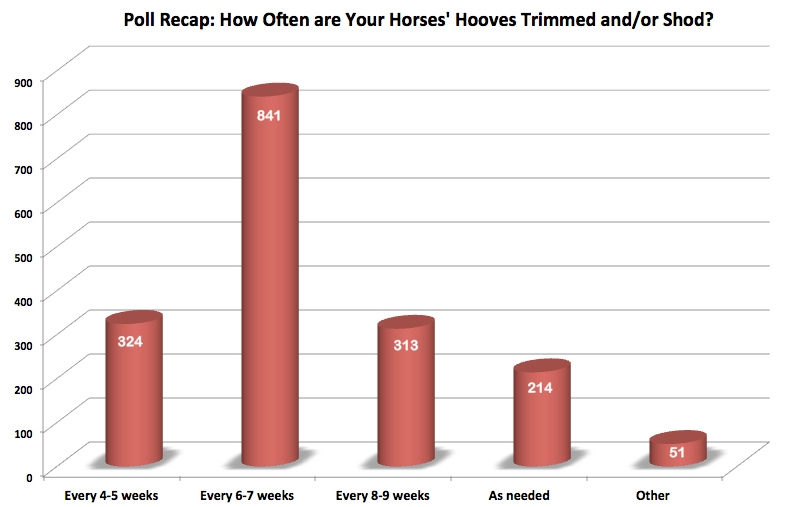 Some people commented that their horse is trimmed and/or shod every one to three weeks:

Others said their horses are on a four- to six-week hoof care schedule:

A few respondents said their horses are trimmed and/or shod every seven to nine weeks:

Many people said their horses’ hoof care schedules depend on the season:

Others mentioned their horses were on different hoof care intervals:

And some left general comments about hoof care:

You can find more information on horse hoof care, including how the horse in motion relates to trimming and shoeing, evaluating and shoeing the “normal” horse hoof, tips for finding a farrier, and how horses’ feet can change in response to external factors. You can also find many articles in our “hoof care” and “shoeing” subtopic pages at TheHorse.com!

This week, we want to know: what is the most expensive item you expect to purchase for your horse this year? Vote now and share your comments at TheHorse.com/polls!

The results of our weekly polls are published in The Horse Health E-Newsletter, which offers news on diseases, veterinary research, health events, and in-depth articles on common equine health conditions and what you can do to recognize, avoid, or treat them. Sign up for our e-newsletters on our homepage and look for a new poll on TheHorse.com. If you are interested in adopting this horse, please submit an ‘Adoption Inquiry’ via our website: Allaboutequine dot org. No…
07/01/2021
Total views: 2837