Is your horse’s diet and microbiome to blame for bad behavior? In this article we’ll break down the research. 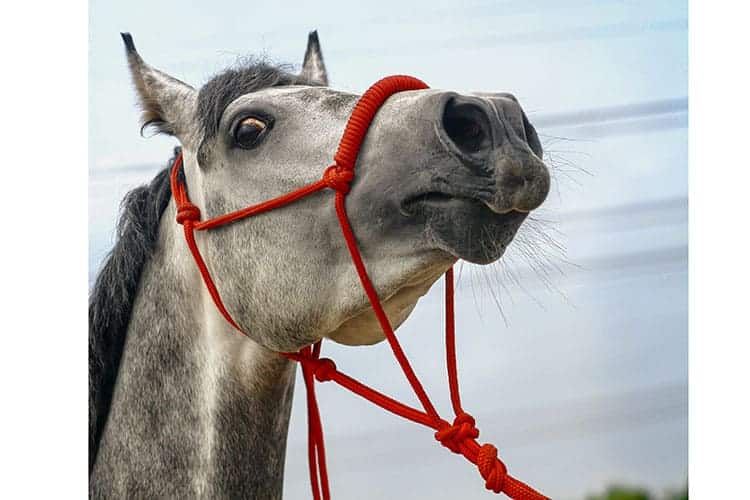 Is your horse’s diet and microbiome to blame for bad behavior?

We all know that horse. The anxious, flighty one that’s unpredictable and can be difficult to handle. If it’s your own horse, have you searched for ways to help him relax? Have you used calming supplements or training techniques, with less than stellar success? Based on recent work, researchers suggest we’ve been going about the problem the wrong way. Instead of focusing on calming the brain, they say we should be focusing on the gut and the millions of microbes within it to modulate equine behavior.

“There is anecdotal evidence of a link between diet and behavior in horses, where diets high in starch reportedly lead to behavioral changes, with horses reported as ‘spooky’ and ‘on their toes,’ ” says Jo-Anne Murray, PhD, MSc, PgDip, PgCert, BSc(Hons), BSHII, RNutr, PFHEA, FRSB, honorary professor at the University of Glasgow School of Veterinary Medicine, in Scotland.

In this article we’ll break down the research showing how diet affects equine behavior. We’ll also outline the complex bidirectional relationship between the nervous system (brain), GI tract structures, and population of bacteria, viruses, and protozoa that makes up the intestinal ­microbiome.

In 2015 French researchers demonstrated that diet appears to influence equine behavior (Destrez et al.). In their study, horses received either a primarily hay diet (90% hay and 10% barley) or a high-starch diet (57% hay and 43% barley), or they transitioned from a high-fiber to a high-starch diet over five days. The research team collected fecal samples from each horse to analyze the microbiome and performed two behavior tests: a sociability test in response to an unfamiliar horse and a neophobia test in response to a novel object. Finally, the researchers assessed the horses’ use of their time when stalled. Here’s what they found:

“This research group therefore concluded that in horses, changes in behavior appear to be linked with changes in the gut microbiota,” she says.

Murray and colleagues in the U.K. conducted similar types of studies. In one they fed ponies either a high-fiber or high-starch diet for 28 days. At the end of that period, they performed two behavioral tests. The first was a passive human test where an individual the ponies did not know stood motionless in a familiar test barn. The second was a novelty test in which they placed an object unfamiliar to the ponies in front of a bowl full of food to which the ponies were ­accustomed.

“The behavioral responses of the ponies to the human were recorded during these two tests, including alertness, feeding, interaction, and locomotion,” Murray says. “Behaviors such as glancing at the human/stimulus, sniffing/touching, feeding, and moving at various gaits and pace changes were assessed.”

Key findings from the study included:

“The high heart rates indicated higher stress levels, but this was not shown in the horses’ behaviors,” Murray says. “We hypothesized that this may have been due to the horses being very well-handled. We therefore conducted a second study, this time with naive (unhandled) ponies.”

In that study her team fed ponies a high-fiber or high-starch diet for 14 days, after which they performed the same two behavioral tests as in the previous study.

“A clear effect of diet on the fecal microbiota and behavior in the ponies was observed in this study,” says Murray.

They observed increased frequency in pace changes (i.e., between different gaits when released in the test barn) when they fed the ponies a high-starch diet. Individuals observing the ponies’ behaviors said the high-starch-diet ponies were more nervous, tense, and unsure.

When those same ponies consumed the high-fiber diet, they were more settled.

Murray’s team also extracted DNA from fecal samples collected at the end of the 14-day feeding period and analyzed it for diversity, richness, and composition.

“These lactic-acid-producing bacteria can reduce the pH in the hindgut, leading to a decrease in the number of fiber-degrading bacteria that cannot survive in a lower pH environment,” she adds. This decrease in hindgut pH contributes to the development of subclinical or clinical acidosis—abnormally high acidity—and increases the horse’s risk of developing colic or laminitis.

“While many questions remain to be answered about how the MGBA affects equine behavior, this study clearly shows that even a small dietary change can result in deleterious alterations in both behavior and fecal microbiota,” Murray says. “It is important to note that the amount of starch that was fed to these ponies was less than many leisure horses receive in their ration. This shows that even small amounts of starch in the diet can have a significant effect on your horse’s behavior.”

Even small amounts of starch in the diet can have a significant effect on your horse’s behavior.

Overview of the MGBA

While scientists have long known (since the mid-1800s) a link exists between the gut and the brain, they’ve only recently described the main components of this axis. Based on our current understanding, the MGBA is composed of:

Therefore, neural, neuroendocrine, and immunological signals allow the gut (including the microbiome) and brain to communicate with one another in a complex, bidirectional fashion.

But how does the microbiome fit in? Let’s review what we know about the intestinal microbiome. The equine microbiota consist of approximately 10 billion microorganisms per gram of ingesta in the cecum. This includes more than 100 genera of bacteria, as well as protozoa and fungi (Mach et al., 2020).

The microbiota promote digestion and nutrient absorption, play important roles in protecting the horse against pathogens and the diseases they cause, and produce short-chain fatty acids that horses use for energy. But this is only a small part of what they do.

In a review article on the mind-altering power of the human gut, Korean researchers said the microbiome can regulate the neurons of the enteric nervous system. Lactobacillus and Bifidobacterium species alter how easily the system’s nerves “fire” to provide feedback to the CNS (Kim et al., 2018). The microbiota also produce a variety of neurotransmitters that directly stimulate the CNS. Lactobacillus, Bifidobacterium, and Escherichia coli (another bacterium), as well as Saccharomyces (yeast), can produce serotonin, catecholamines (epinephrine and dopamine are among them), and acetylcholine. These neurotransmitters can stimulate the nerves of the enteric and autonomic nervous systems. In turn, the autonomic nervous system stimulates the CNS and the hypothalamic-pituitary axis.

The microbiome, therefore, performs a vast and varied array of activities in the body beyond fermentation. A horse’s natural diet includes small but frequent meals of high-fiber, calorie-dilute feeds. Intensive management conditions, however, result in horses being fed large and infrequent low-fiber, high-starch meals. Because the microbiome’s composition depends on the horse’s diet and a variety of other factors, the microbiota differ depending on what and how the horse is fed. A high-starch, low-fiber diet is one described as “an alimentary stress.” While we typically think of physical stress—such as overstocking pastures or extended stall confinement—as causing behavioral issues, indeed, stress the gastrointestinal system experiences in response to high-starch, low-fiber feeds could cause similar behavior issues. Behaviors associated with stress, including alimentary stress, include increased attentiveness and vigilance or stereotypic behaviors such as cribbing and weaving.

“Many high-performance animals are going to need at least a little bit of starch and/or fat in the diet to meet the energy demands of the sport,” says Kathleen Crandell, PhD, a nutritionist for Kentucky Equine Research, in Versailles. “The way to feed it safely is to not feed more than 1 gram of starch per kilogram of body weight per meal.”

Study results show this starch amount minimizes the glucose entering the bloodstream at one time without causing major shifts in the microbiome—both of which, Crandell says, can affect the gut-brain axis.

“I recommend feeding that amount of starch combined in a meal with a variety of highly digestible fiber sources, such as alfalfa pellets, beet pulp, or a low-starch/high-fiber concentrate,” Crandell says. “Feeding fiber along with the starch slows the uptake of glucose and moderates changes in the microbiome.”

Added dietary fat or a high-fat concentrate can also affect the microbial balance, but not usually when fed in moderate quantities.

“A study looking at 8.3% oil in the total diet resulted in shifts in the microbiome, but not to the extent of causing any physiological problems,” says Crandell.

Crandell also says any changes to the diet, whether adding starch or fat, need to be done gradually to give the microbial populations time to adapt. Abrupt dietary changes do affect the microbiota. In addition, those smaller, more frequent meals are ideal because they provide more consistent input to the microbiome.

“The gastrointestinal tract works hard digesting feedstuffs, making essential nutrients that the horse can’t produce on its own, protecting your horse from disease, and even shaping the behavior of your horse,” she says. “Thus, it is vital to maintain gut health and to ensure you are managing your horse in a way that promotes gut health.”

This includes feeding a diet high in fiber, avoiding making sudden changes to your horse’s diet, offering fiber first, and then adding feedstuffs only where required.

If you are interested in adopting this horse, please submit an Adoption Inquiry via AAE's website; No texts please: allaboutequine…
12/05/2022
Total views: 14