Spring Grass Safety for Your Horse

As benign as it might seem, this fresh forage can cause more harm than good. Here’s what to remember. 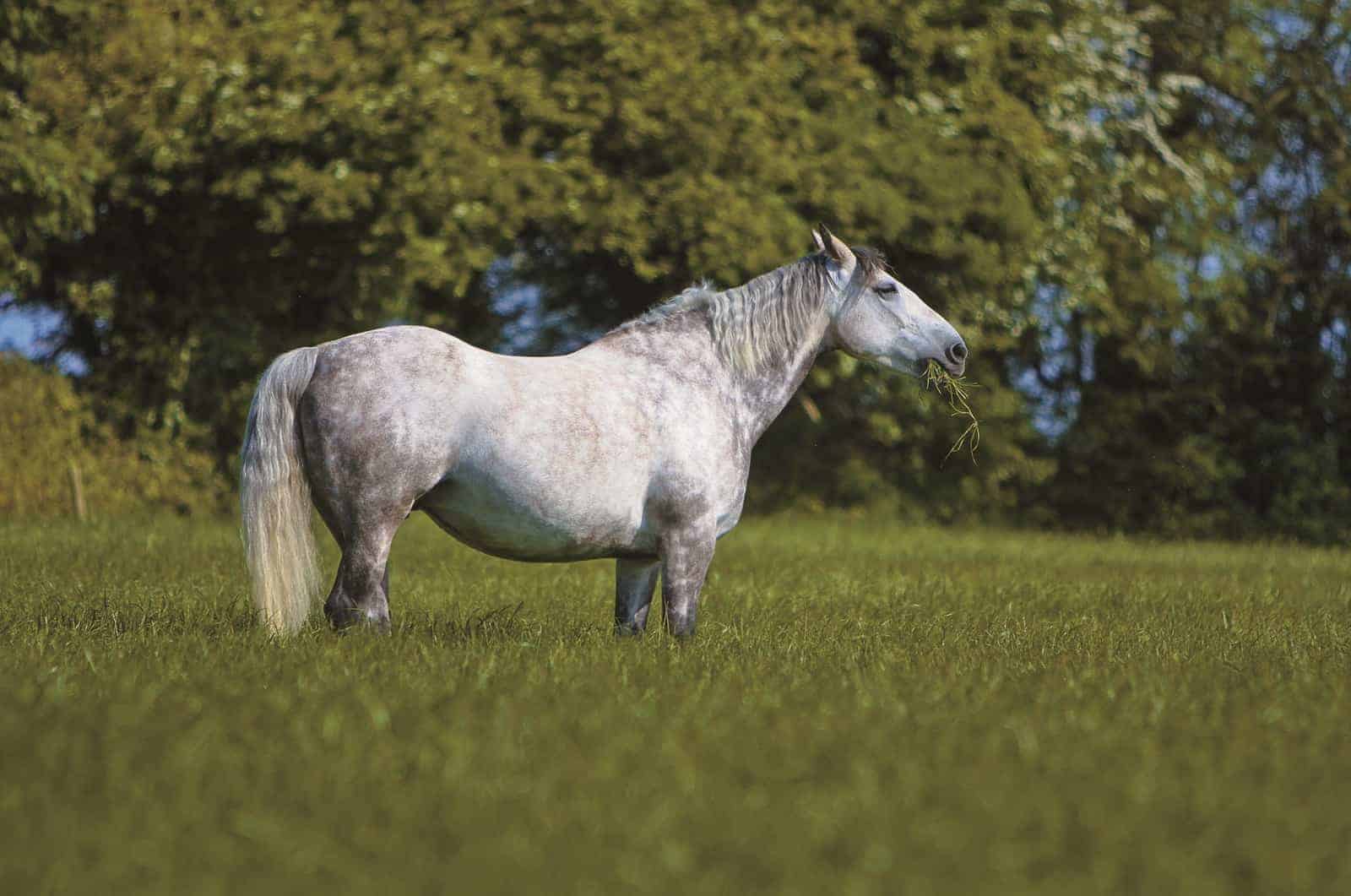 As benign as it might seem, this fresh forage can cause more harm than good.

Not all pasture grass is created equal. Although this forage cornerstone of the equine diet offers excellent nutrition, provides fiber to keep the horse’s digestive tract healthy, and allows the horse to satisfy his innate need to graze, come spring it is also notorious for causing causing problems. This is particularly true in horses at risk for digestive or metabolic disorders.

“The NSC content of grass varies widely depending on environmental conditions, plant species, and stage of growth,” McIntosh continues. “Through photosynthesis, grasses use light to produce sugars from carbon dioxide. When sugars are produced in excess of the plant’s energy needs for growth and development, they are converted into storage, or ‘reserve,’ carbohydrates.”

Grasses are classified as either warm-season or cool-season, based partly on their growing cycle throughout the year and also on how and when they metabolize and photosynthesize sunlight to produce carbohydrates.

Cool-season grasses can accumulate higher amounts of carbohydrates because they store their fructans outside of the chloroplast (the part of plant cells that conducts photosynthesis) in vacuoles that don’t limit their storage. In warm-season grasses, starch production and storage is limited to within the chloroplast where it is synthesized.

“In the spring, cool-season grasses are the main concern for horses because the grass is growing rapidly and environmental conditions favor NSC production,” McIntosh explains. “Warm-season grasses grow best during the hot summer months and typically produce lower amounts of NSC.”

The Trouble with NSCs

Photosynthesis occurs during the daylight hours to produce NSCs, which fuel plant growth overnight. Therefore, NSC levels in grasses tend to increase throughout the day, peaking at about 3 or 4 p.m., and decrease overnight to lows in the very early morning hours. In the spring, cool-season grasses are in an early and active growth stage, resulting in high NSC production and turnover. However, spring evenings can be quite cool, and if the temperature drops below 40 degrees F, the plant is unable to use NSCs for growth, causing sugars and fructans to accumulate.

“In general, monitoring NSC is difficult because of fluctuations throughout the day (peaking in the later afternoon), across the season (with peaks in the spring and fall where days are sunny but evenings are cool), and depending on environmental conditions (drought, frost, soil fertility, moisture, etc.),” says McIntosh.

Individuals at risk for NSC-related diseases and disorders should be housed on drylots and fed hay that is low in NSC, along with a ration balancer concentrate.

So why are nonstructural carbohydrates in spring grass problematic for horses? Well, turn a horse out that has been kept on hay (or sparse pasture) all winter, and he suddenly has an opportunity to consume large amounts of delicious, lush NSC-rich grass. It doesn’t help that these young plant leaves have lower amounts of fiber (think about long stemmy grass in the late fall vs. the short pliable grass in the spring), making spring grass particularly palatable. Consuming such large amounts of NSC, particularly if introduced suddenly, can play havoc with the horse’s digestive system and metabolism.

When a horse consumes starch and sugars, his digestive tract’s enzymes digest them to simple sugars, such as glucose, that the body then absorbs. When blood glucose concentrations rise, the body releases the hormone insulin, which facilitates the movement of glucose from the bloodstream into other tissues, such as muscle and adipose (fat) tissue. Fluctuations in blood glucose and insulin concentrations can contribute to the development of insulin resistance, which involves the tissues becoming less sensitive to insulin’s activity and results in uncontrolled blood glucose concentrations. Horses with insulin resistance might also have elevated insulin concentrations from the body overproducing the hormone in an attempt to overcome its lowered efficacy. Researchers have shown this can directly cause the hoof disease laminitis, in which the Velcro-like laminae that suspend the coffin bone inside the hoof wall fail. Elevated glucose concentrations might also trigger laminitis.

Another concern owners should have when eager horses consume large quantities of spring grass is the risk of overwhelming the digestive tract’s ability to digest NSCs. In such situations, the NSCs will spill over into the horse’s large intestine, disrupting the normal fermentative activity of the microbial organisms residing in the cecum and colon (this situation is similar to grain overload).

“The rapid fermentation of the increased starches results in a series of negative biochemical reactions, ultimately breaking down the basement membrane which then triggers the separation of the laminae that connect the hoof to the coffin bone,” says Richard A. Mansmann, VMD, PhD, Hon Dipl. ACVIM-LA, clinical professor emeritus at North Carolina State University’s College of Veterinary Medicine, past founding director of the College of Veterinary Medicine’s Equine Health Program, and current owner of the Equine Podiatry and Rehabilitation Practice, in Chapel Hill, North Carolina. “The amount of negative reactions (i.e., laminar separation) dictates the level of severity of the laminitis. With every subsequent bout of laminitis there is a geometric amount of damage and, thus, a poorer prognosis and greater recovery time.”

Something else to be concerned about in the spring—and fall, for that matter—are fructans. These are chains of fructose molecules that are indigestible by mammalian enzymes (similar to cellulose or other fibers) but readily fermented by the microbes in the horse’s large intestine. Therefore, they cause a response that’s similar to what happens when starch reaches the hindgut; they trigger acid production, a drop in pH, and a chain-reaction that might result in laminitis. Fructans appear to cause increases in blood insulin and, thus, might also potentially trigger laminitis.

“Monitoring fructan intake is difficult because it varies depending on environmental conditions, and there are no standard laboratory methods for its analysis,” McIntosh says.

Scientists have conducted several research studies to examine NSC and/or fructan fluctuations in cool-season pasture grasses and resulting glucose and insulin concentrations in horses at various times of the day and year. Researchers in Virginia and North Carolina that have examined these variations throughout the year have found that both NSC and fructan levels are highest in early spring (April and May) and lower in summer, fall, and winter. Glucose and insulin concentrations coincide with the NSC increases in the spring, and they are lower in the summer and fall.

Based on the above-mentioned and other research studies, there are several management strategies owners can employ to reduce the laminitis risks associated with spring pasture consumption, especially in horses that have had previous bouts of laminitis attributed to grass intake, or those with insulin resistance or other metabolic conditions (such as obesity or equine Cushing’s disease).

“Individuals at risk for NSC-related diseases and disorders should be housed on drylots and fed hay that is low in NSC (less than 10% NSC on a dry matter basis), along with a ration balancer concentrate to meet nutrient requirements,” McIntosh suggests.

If you do not have access to a drylot, then turn these horses out on pasture only in the very early morning hours (when NSC concentrations are lowest) while wearing grazing muzzles. Mansmann suggests owners of at-risk horses have their veterinarians take lateral radiographs of each of the horses’ feet twice annually to monitor any subclinical changes in coffin bone position before pain/lameness occurs. Introduce horses that have chowed down on hay all winter to spring grass slowly, to allow their digestive tracts to adapt to the higher NSC concentrations and reduce the risk of microbial upset. Turn them out only for short periods of time (starting at one hour) during those early morning hours, increasing by 30-minute increments every few days. Horses that have been kept on pasture 24/7 all winter generally adapt and adjust naturally to the changing grass composition and quantity. But owners should monitor their horses closely and, perhaps, bring them in off pasture later in the day (or apply grazing muzzles) when NSC concentrations peak. Even if a horse is well-adapted to spring grass, it might be prudent to restrict grazing after cool overnight temperatures or a frost. Remember, these temperatures render the plant incapable of using NSCs for growth and result in their accumulation and higher concentrations the following day.

Also note that when horses have limited or restricted pasture turnout time, their consumption rate and, therefore, NSC intake during that limited time might actually increase, compared to a horse that grazes continually. In one study researchers determined that horses turned out 24 hours per day had lower peak insulin concentrations than horses turned out for 10 hours at 9 p.m. on the same pasture, likely because the latter group ate the higher NSC more rapidly and in greater quantities. Also, horses turned out continuously had higher (less acidic) overall fecal pH than horses turned out either in the evening (9 p.m.-7 a.m.) or daytime hours (10 a.m.-6 p.m.).

General good grazing practices also help reduce pasture NSC levels. McIntosh suggests that “managing pastures so that they remain vegetative (in growth stage) reduces storage carbohydrates (fructans) by encouraging utilization by the plant. Overgrazing can also increase fructan intake because it forces a horse to consume the plant stem closer to the ground, where fructan is stored. Rotational grazing should be implemented, where horses are removed from pastures to allow for rest and regrowth when the forage is grazed down to 3 to 4 inches, and horses can be returned to graze when it reaches 6 to 8 inches.” Selecting warm-season or low-NSC cool-season grasses when seeding pastures can also minimize risk of NSC overconsumption.

“NSC accumulation is still possible in the afternoon hours for all forage species during periods of peak growth and sunny days,” McIntosh adds.

While horses might look longingly over a drylot fence or disappointedly beyond the nose of their grazing muzzle at lush spring pasture, remember that their suffering with laminitis or another disease would be far worse. Managing your horses and your pasture properly will help keep both healthy and productive.

Beautiful 2 year old Clara is now available for adoption by an experienced horseman/women who wants to bring up a…
08/12/2022
Total views: 2336