Researchers confirmed some suspected patterns in PPID clinical signs and identified others they considered surprising. 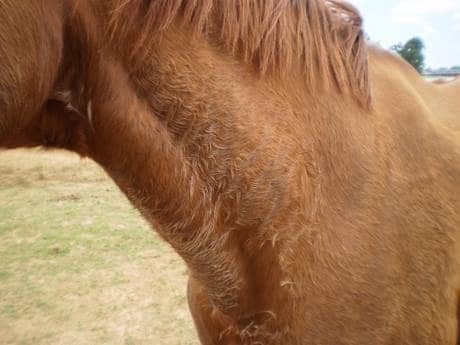 If you build it they will come. This is especially true if it’s a nationwide study on equine Cushing’s disease: Veterinarians and horse owners recently enrolled nearly a thousand horses of all breeds and ages showing one or more possible recognizable characteristics of the disorder also known by its more technical name as pituitary pars intermedia dysfunction (PPID). Researchers confirmed some suspected patterns and identified others they considered surprising in two scientific papers based on the data.

An enlargement of part of the horse’s pituitary gland is responsible for PPID, which causes release of a variety of hormones that upset the horse’s metabolic balance. The condition advances with age, so it’s best to catch and treat it early. However catching it early can be more difficult than it might sound, so veterinarians are digging for the simplest, most effective ways to identify PPID.

The team determined that 515 of the horses, which included light breeds, Warmbloods, drafts, and ponies, had complete case information and could be included. Epidemiology is simply a fancy word for a study of the patterns, causes, and effects of health and disease conditions, along with risk factors and preventive approaches.

For the first paper, covering the epidemiologic characteristics of horses with PPID at initial diagnosis, Grubbs stated horses that were included in the study had to have at least one of the following clinical signs: generalized or regional hypertrichosis (excessive hair growth and/or delayed haircoat shedding), muscle wasting, abnormal fat distribution, decreased athletic behavior/lethargy, laminitis of unknown origin, polyuria (excessive urination), polydipsia (excessive thirst), susceptibility to infections, abnormal sweating, potbelly/weight gain, and/or inappropriate lactation. Horses with no clinical signs were excluded from the study.

Researchers collected signalment and demographic data (age, sex, breed, location) on each horse at initial veterinary visit and conducted a case history and physical examination. Then they collected blood to measure basal (resting) ACTH (adrenocorticotropin hormone), fasting insulin, and glucose levels—which can point to PPID or to insulin resistance (IR), a reduction in insulin sensitivity that makes it harder for cells to transport blood sugar for storage—and shipped samples overnight to the same laboratory for analysis.

Next, the team sifted through the test results and associations with demographics to determine which characteristics could help predict if a horse has PPID.

Insulin resistant horses, no matter their age, were twice as likely to have PPID as horses with normal insulin levels. Forty-three percent of Cushing’s horses were also hyperinsulinemic.

From the first paper, Grubbs drew this take-home: “When evaluating horses with suspected endocrine disease, at a minimum evaluate resting ACTH, fasting insulin, and fasting glucose.”

In the second paper, which Grubbs presented as a poster, the researchers focused on the clinical signs themselves. “The prevalence of PPID was significantly greater among horses found to have five of the 11 clinical signs present,” he said. It wasn’t astonishing that decreased athletic behavior, delayed shedding, loss of muscle mass, and weight loss were on that list, said Grubbs. However, “when we looked at clinical signs and degree of predictability, or what … could be most predictable (of PPID), abnormal sweating was the No. 1 clinical sign,” he said. “A lot of people don’t even think about that.”

It wasn’t statistically significant, but there was a trend toward PPID when the three of the remaining clinical signs from the list of 11 were present (polydipsia, polyuria, and laminitis). Cushing’s prevalence was actually less when four of the remaining signs were absent (cresty neck, fat pads, potbelly, weight gain, and recurrent infections).

Delayed hair coat shedding and weight loss each were also significant predictors of a horse having PPID.

Better characterizing these difference will help veterinarians who are assessing horses whose clients might not be able to pay for testing but who want to treat symptomatically. “They’d rather just go on clinical signs,” he said. “We’re trying to help them make the best informed decision.

“Watching for improvement (after treatment), it gives you more confidence if you’ve got those clinical signs and you’re looking at (those in) a 14-year-old horse versus a 24 year-old horse.”

There will be plenty of questions coming out of this research to build on, Grubbs said, but it’s important to look back and realize how far veterinarians have come in their ability to diagnose PPID and treat it. “We’re much better than we were five years ago, 10 years ago,” he said. “(The landscape has) changed rapidly in the past five years.”

If you are interested in adopting this horse, please submit an ‘Adoption Inquiry’ via our website: Allaboutequine dot org. No…
07/01/2021
Total views: 3891