With a mortality rate of 90% in horses, EEE is a serious mosquito-borne disease. Eastern equine encephalomyelitis (EEE) is only one of several important vector-borne diseases that is of significant concern to horse owners. With a mortality rate of 90%, it is a deadly disease. The U.S. Department of Agriculture Animal and Plant Health Inspection Service, Veterinary Services works with the U.S. Centers for Disease Control and Prevention and public health officials to collect data on EEE and other vector-borne diseases. 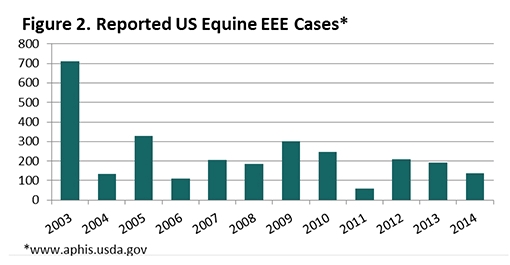 Despite the geographic distribution of equine EEE cases, the rapid interstate and international transportation of horses for show, racing, recreation, sales, breeding, and other activities strongly supports the use of EEE vaccines. The EEE vaccine is considered by the American Association of Equine Practitioners to be a “core” vaccine.

Insect control and appropriate use of approved insecticides are critical to reducing the risks of EEE as well as West Nile virus infections, vesicular stomatitis, and other insect-borne diseases.