Grazing muzzles can be effective at reducing pasture intake, sometimes reducing intake by as much as 85%. 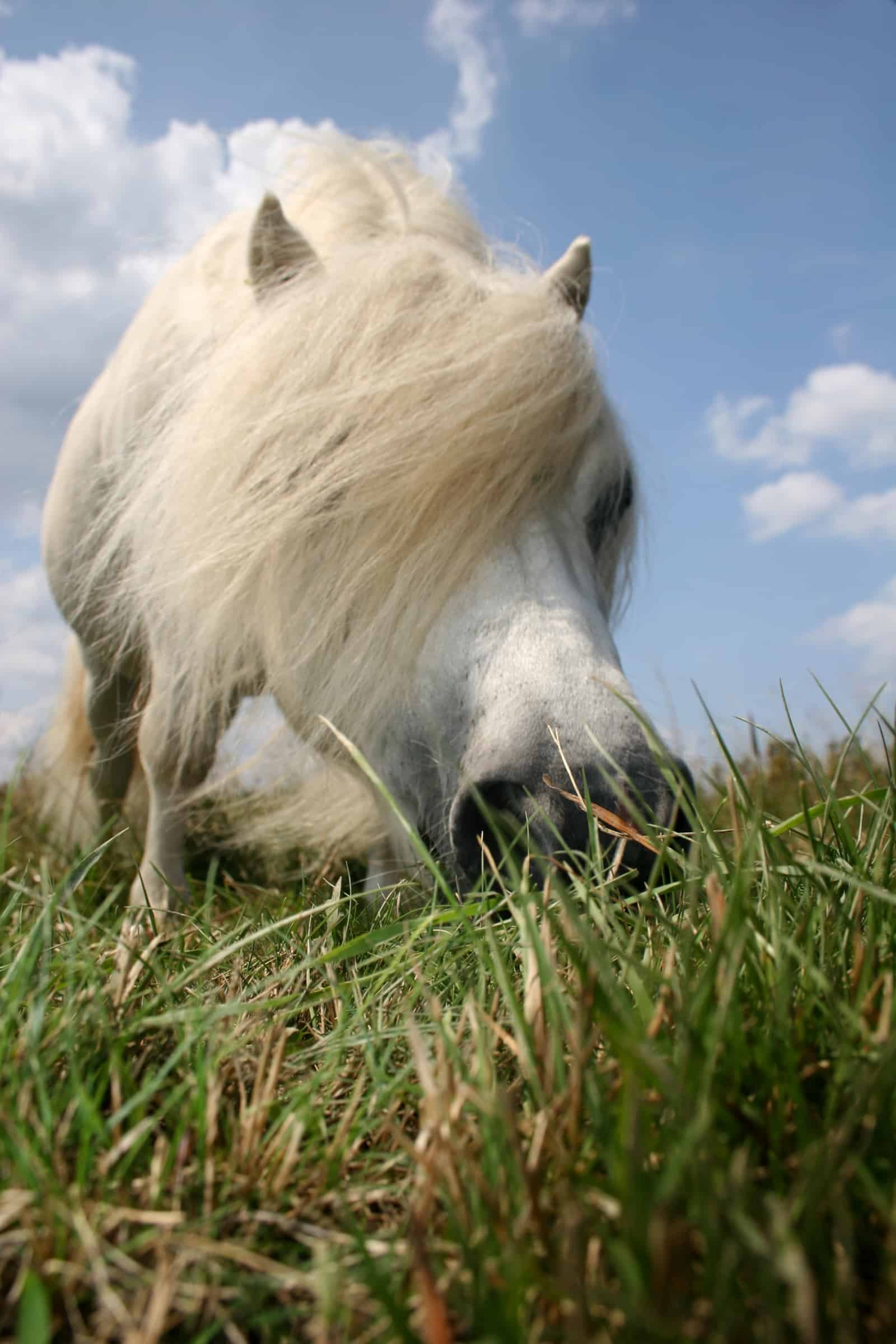 While British artist Norman Thelwell’s depictions of pleasantly plump ponies make most horse lovers crack a smile, actually owning a horse with this body type is serious cause for concern. Equine obesity can lead to a variety of sometimes life-threatening ailments including laminitis and equine metabolic syndrome.

The challenge facing these horses’ owners is an effective method by which to restrict the amount of pasture or hay these animals consume. Many owners turn to grazing muzzles to reduce horses’ forage intake, and a group of British researchers recently determined this method can be very effective.

“Anecdotally, ponies fitted with grazing muzzles spend a greater proportion of time engaging in foraging or eating behavior than their nonmuzzled counterparts, yet either lose weight or retain an established, trim body condition,” the researchers explained. “However, there is little information on the extent of intake restriction imposed by grazing muzzles.”

The team studied four adult ponies either grazing freely or with a well-fitted grazing muzzle for “four three-hour occasions per pony” (a total of eight measurements per pony were taken). Each muzzle had a 2 cm diameter hole through which the ponies could eat.

Researchers obtained pasture samples daily to assess the amount of forage available to the ponies, and they determined each pony’s insensible weight loss (ISWL, the loss of body weight not associated with the loss of feces and urine; often associated with fluid loss from respiration and sweating) immediately preceding and immediately following each three-hour grazing period. Pasture intakes were determined by changes in body weight (after taking into account the weight of any feces and urine produced plus the estimated ISWL) after the three hours of grazing, using a calibrated weighbridge.

Upon reviewing results, the team found that:

“Grazing muzzles appear to be an effective means of restricting pasture intake by ponies,” the researchers concluded.

Grazing muzzles must be used with care, should be properly fitted, and horses and ponies should be adapted gradually to wearing them.

“(A well-fitting grazing muzzle is) one that stays on the pony and also one that does not cause hair loss or abrasion to the skin through rubbing or restrict jaw movement (i.e., chewing) in any way,” Longland explained.

She also noted some other considerations owners should be conscious of when introducing a muzzle:

Longland and Harris added that owners should closely monitor group and individual behavior to observe any potential concerns caused by changes to the herd dynamics. They do not advise using total exclusion muzzles, which prevent any forage intake.

“Be vigilant and see what works for your pony,” Longland concluded.