Horses are more prone to digestive upset than other domestic animals because of how their GI tract functions. 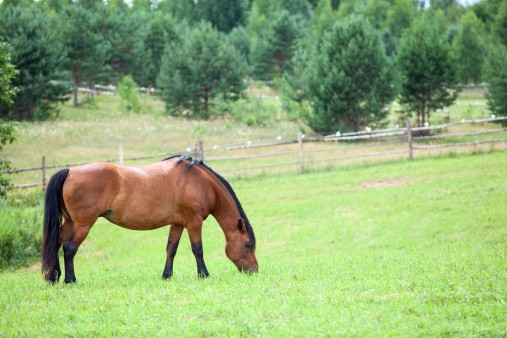 Horses are more prone to digestive upset than other domestic animals because of how their gastrointestinal tract functions and how we feed them.

When you go to the barn for evening chores you hear banging in the far stall–your horse is down and rolling. He gets to his feet when you run to the stall, but immediately starts pawing and circling and quickly drops down again to roll. He’s sweaty and in pain–clearly, he’s colicking. As you call the veterinarian you run through your mental checklist, beginning with the important question, “What did I feed him today?”

Anthony Blikslager, DVM, PhD, Dipl. ACVS, professor of equine surgery and gastroenterology at North Carolina State University, sees colic cases regularly. “When I finish with a colic surgery, the owner often asks what he/she can do to avoid colic in the future,” he says. “It all goes back to basic management, and nutrition is an important part of that management.” Horses are more prone to digestive upset than other domestic animals because of how their gastrointestinal (GI) tracts function and how we feed them. The horse evolved as a grazing animal, and his digestive tract is designed to utilize forage. It functions best and remains healthiest when he’s allowed to roam at pasture, eating more or less continuously and consuming small amounts often. In domesticating horses we’ve confined them and typically feed hay and grain in scheduled meals. This unnatural environment often leads to digestive problems and colic.

Blikslager says horses are one of a few animals that digest most of their feed in the hindgut (cecum, colon, and large intestine) rather than in the stomach and small intestine. The horse’s GI tract is designed to transfer food to the hindgut as swiftly as possible. Feed can travel through the small intestine to the hindgut in three hours or less, according to Blikslager. This can create digestive problems if owners offer high volumes of grain per feeding, because some reaches the hindgut before it is fully digested.

You can improve your horse’s digestive health by managing his dietary regimen the way nature intended. Ideally, a horse’s diet should be comprised of good-quality forage, with added grain and concentrates only if his level of work demands it.

While turnout that allows a horse to graze continuously is best, this might not be realistic for your situation. “If a horse must be confined, maximize the amount of forage you feed,” says Blikslager.

Amy Gill, PhD, an equine nutritionist based in Lexington, Ky., says two things can help prevent colic: “One is to keep horses moving, to simulate free-ranging where they were walking all the time,” she says. “Moving while grazing helps keep circulation going, and continual eating keeps the digestive tract moving (promoting gut motility). This is the other important thing–eating small amounts continually.”

Promoting this gut motility can be challenging for owners whose horses live in stalls. “The risk for colic increases the more the horse stands still, especially if standing still without anything to eat,” says Gill.

Stephen Duren, PhD, an equine nutritionist with Performance Horse Nutrition in Weiser, Idaho, has observed that ranch horses in large pastures (never confined, not eating grain) almost never colic. If a horse is confined, with hay substituting for pasture (and grain or supplements added to balance any nutrient deficiencies in the hay, or to provide added calories for high-energy demands of a performance career), you should be particularly careful/strategic about planning his diet. Although many owners have a twice-a-day grain-feeding ritual, Duren recommends spreading the ration into smaller, more frequent meals–particularly when horses are in stalls and volume of grain fed daily is high.

“Confined horses are more likely to colic because they don’t get enough forage or exercise,” says Duren. “The owner limits the amount of forage (to prevent weight gain), and the horse doesn’t eat enough to keep the digestive tract healthy. Daily turnout, longeing, or any other type of daily exercise can be beneficial to digestive health.”

As stated previously, forage should be the main component of a horse’s diet. “Money spent on good hay will decrease the amount of grain needed and the number of colics or digestive upsets,” says Duren. “As quality or quantity of forage in diet decreases, you have to rely on grains and supplements, which by nature are not as healthy for the horse.”

Have your hay analyzed for nutrient content (protein levels, minerals, etc.; there are services that do this, such as through your local cooperative extension office, but also keep a watchful eye on your hay for contents that might cause a horse to colic. Moldy hay, for instance, generally smells musty and is characterized by a white dust. “Some kinds of mold produce toxins that may cause severe digestive upsets,” says Duren. “Toxic plants may also cause problems. There may be weeds, sticks, or other foreign material baled in hay.”

Most horses, if they have adequate feed, will sort out the less desirable hay portions that might cause digestive problems.

Some hard-working horses, such as racehorses and other high-performance athletes, need to consume more calories more quickly than what they obtain from a forage-only diet. Other horses might need more calories to maintain body weight, such as those that are older or lactating.

“In these instances use a balance of energy sources in the grain portion of the diet,” Duren says. “Don’t just rely on sugars and starches. Use some fat and fiber (such as beet pulp or soybean hulls, which can be digested in the hindgut) in the mix to reduce pressure on the small intestine for getting those sugars and starches digested. Using high-calorie fiber sources and some fat enables you to reduce the amount of carbohydrates supplied by sugar and starch. Fat is more energy-dense, and you don’t have to feed such a large volume.” Thus, it is much healthier for the hindgut.

“Even if not all the fat is digested in the small intestine, at least when it gets to the hindgut it’s not inappropriately digested and causes less colic,” adds Blikslager.

If a horse is fed a lot of grain, corn-based concentrate, or sweet feed, his digestive tract can’t absorb all the sugar before it reaches the cecum and colon. As mentioned, the hindgut is designed to digest grass; sudden bombardment with sugar adversely impacts the microbial ¬population. Related Content: How Much Grain Should I Feed My Colic-Prone Horse?

“The trouble with a large concentrate meal is there’s not enough time to digest it in the small intestine,” says Blikslager. “It gets moved down to the hindgut too quickly, and the microbe population shifts toward those that can rapidly digest starch, creating gas in the process.” If the change is too severe, with large proliferation and die-off of certain bacteria, toxins might be produced, leading to more serious problems such as laminitis.

A cow can readily burp up gas created by fermentation because her rumen (first stomach) is toward the front of the body and connected to the esophagus. But since the horse’s fermentation process takes place in the hindgut–halfway through digestive tract–excess gas can’t come back through the tract to be burped, so it must proceed toward the rear. When abnormal fermentation creates too much gas, it causes pressure and pain (colic).

The recommended smaller, more frequent meals should be made up of processed grains, Duren says, to enhance small intestine enzyme digestion of the feed. “We don’t want undigested grain spilling into the large intestine where bacteria ferment them,”he says. “This lowers the pH, kills (beneficial) bacteria, and creates digestive upset and colic.” Horses need plenty of fluid for forage fermentation and to digest their food properly; they produce large amounts of saliva to mix with feed, and their bodies pull fluid from the bloodstream continually into the intestines, aiding gut motility. Material moves through the small intestine in liquid form, and the colon absorbs the water during the last phases of digestion, to be recycled via the bloodstream and used again by the salivary glands and forward portions of the digestive tract for the next journey through.

Provide your horse with an ample water supply that’s not too cold in winter or too warm in summer, or the horse won’t drink enough and could develop an impaction.

For the horse’s fermentation-focused digestive system to process forages, the hindgut’s microbial population must be healthy, with appropriate numbers of helpful bacteria. Many horsemen feed commercial supplements or feeds containing some of these microbes. Use of these products (called probiotics) began several decades ago in attempts to replace normal gut flora after animals were sick (and not eating) or given oral antibiotics that destroyed good bacteria along with the bad. “Now we have multiple probiotic and prebiotic products that can stabilize the good microbes,” says Duren. “They’ve also been shown to have some effect in guarding against harmful bacteria and, thus, help maintain normal gut function.”

Researchers at the University of Georgia recently studied the growth of various strains of pathogenic bacteria in test tubes to see if adding probiotics would decrease their growth. The tests showed that probiotics must be specific to the equine body to be effective.

“It must be one that’s normally found in the equine digestive tract,” says Duren. “What works for a dairy goat or a cow may not work as effectively for a horse.”

Prebiotics, on the other hand, are a newer concept. These are not microbes; instead, they’re ingredients that feed and maintain the microbes. Prebiotics are indigestible sugars that make their way through the digestive tract, stimulating beneficial bacteria growth. Some of them trick bad bacteria into binding to them and are excreted in manure.

Because the horse’s digestive system is not likely to become any less complex or prone to upset, it’s imperative owners feed horses as nature intended and focus on providing good-quality forages rather than high amounts of concentrates.