Kissing spines are more likely to cause clinical problems in certain breeds, disciplines, and age groups. 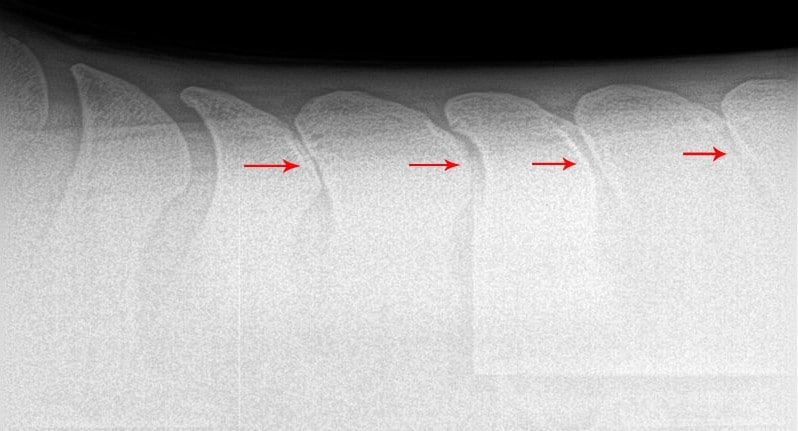 One commonly diagnosed conditions that could cause a horse's poor performance is impingement of the dorsal spinous processes—more commonly known as kissing spines.
Photo: Tracy A. Turner
ADVERTISEMENT

Kissing, while generally considered favorable in its usual context, isn’t always so great when it comes to horses’ vertebral surfaces. Overriding spinous processes–known as kissing spines–can cause severe back pain, according to Tracy Turner, DVM, MS, Dipl. ACVS, but not all horses with the condition have complications because of it. At the 2011 American Association of Equine Practitioners Convention, held Nov. 18-22 in San Antonio, Texas, Turner described a study in which he determined kissing spines are more likely to cause clinical problems in certain breeds, disciplines, and ages, and that a particular combination of therapies can produce successful outcomes.

Turner, of Anoka Equine Veterinary Services, in Elk River, Minn., said back pain has been shown to be a major cause of poor performance and clinical signs are highly variable. Such is the case with kissing spines, so he sought to better define the condition, its detection, and treatments.

"It’s not hard to understand why back pain or anything that interferes with a horse’s back will interfere with its movement," said Turner. "Any contraction in the (back) muscles causes ventral (toward the abdomen) flexion of the spine, which makes it impossible for the horse to engage its hind end and meet its athletic potential."

Of 4,407 horses Turner examined for lameness from Feb. 1, 2004, to Jan 31, 2011, 7% of the cases, or 310 horses, displayed back pain (reacted with pain to pressure applied along the topline or resisted or showed agitation to such pressure). He conducted a complete lameness exam, including thermography and radiography, on each of these horses to rule out other potential pain causes. This narrowed the group to 212 horses (68% of the back pain horses) with kissing spines.

Turner’s study was comprised of the following groups:

In examining and comparing these groups, Turner discovered:

Mild kissing spines are seen in the top image, while the bottom image depicts a more severe case.

Horses’ ground behavior in the back pain groups ranged from hypersensitivity when brushed to girthiness when saddled. When ridden, horses bucked, reared, kicked out, and displayed rear limb dragging, head tossing, and excessive shying. Riders complained these horses were hard to get on the bit, hollow, behind the leg, slow to warm up, stiffer one direction, and exhibited poor transitions.

Thermography is a very useful method for detecting where the pathology might be in the horses with kissing spines (99% sensitivity, but only 70% specificity), Turner said, but the condition must be confirmed using spinal radiography. Pathology in the Group 1 cases occurred between T11 and L2 (11th thoracic vertebra and second lumbar).

"In 90% of cases, T15 was involved," noted Turner. "Not surprising, because the vertebrae change direction there." Kissing spines most commonly occurred between T15 and T18, which is roughly where the seat of the saddle is in the ridden horse. The median number of vertebrae involved in the painful horses was four.

"Dressage horses were distinctly overrepresented," he observed. "Dressage is one-third of eventing, so over 50% of horses with kissing spines (in this study) are in some kind of dressage."

So, why dressage horses? "There are a lot of arguments … the horse is asked to engage its hind end, the rider does more sitting, and the horse is compressed more," Turner opined. Also, "Dressage riders are so attuned to how that horse moves (so it may be that) they complain sooner than other riders," and, thus, these horses made it in for veterinary exams.

Treatments Turner employed in the Group 1 animals included shock wave therapy, mesotherapy (multiple intradermal–in the skin–injections made over the back, croup, and withers), corticosteroid injections, saddle fitting changes, and exercise. He assessed outcomes using owner and veterinarian evaluations of efficacy.

Turner concluded by describing kissing spines as a developmental condition. "I think genes cause it. It does not cause lameness but it does predispose (a horse) to lameness. Thoroughbreds are predisposed. After looking at all the data, kissing spines must go with speed or some other trait that we’ve bred the Thoroughbred for." He reminded the audience of the Thoroughbred’s genetic role in the Warmblood breeds, noting prevalence in those animals.

To counteract the ventroflexion (flexion of the cervical spine towards the underside of the barrel), a horse with back pain needs to be worked and trained to lift up his back as a part of recovery, he explained. And, importantly, veterinarians should employ a combination of medical treatment and other approaches to address kissing spine-related pain.

We have an "AMAZING Lineup" of exciting and available Thoroughbreds for you to meet. They have been rehabilitated, retrained and…
08/06/2019
Total views: 14915