Why Do Horses Buck?

Discover 9 physical and behavioral reasons your horse might be kicking up his heels. 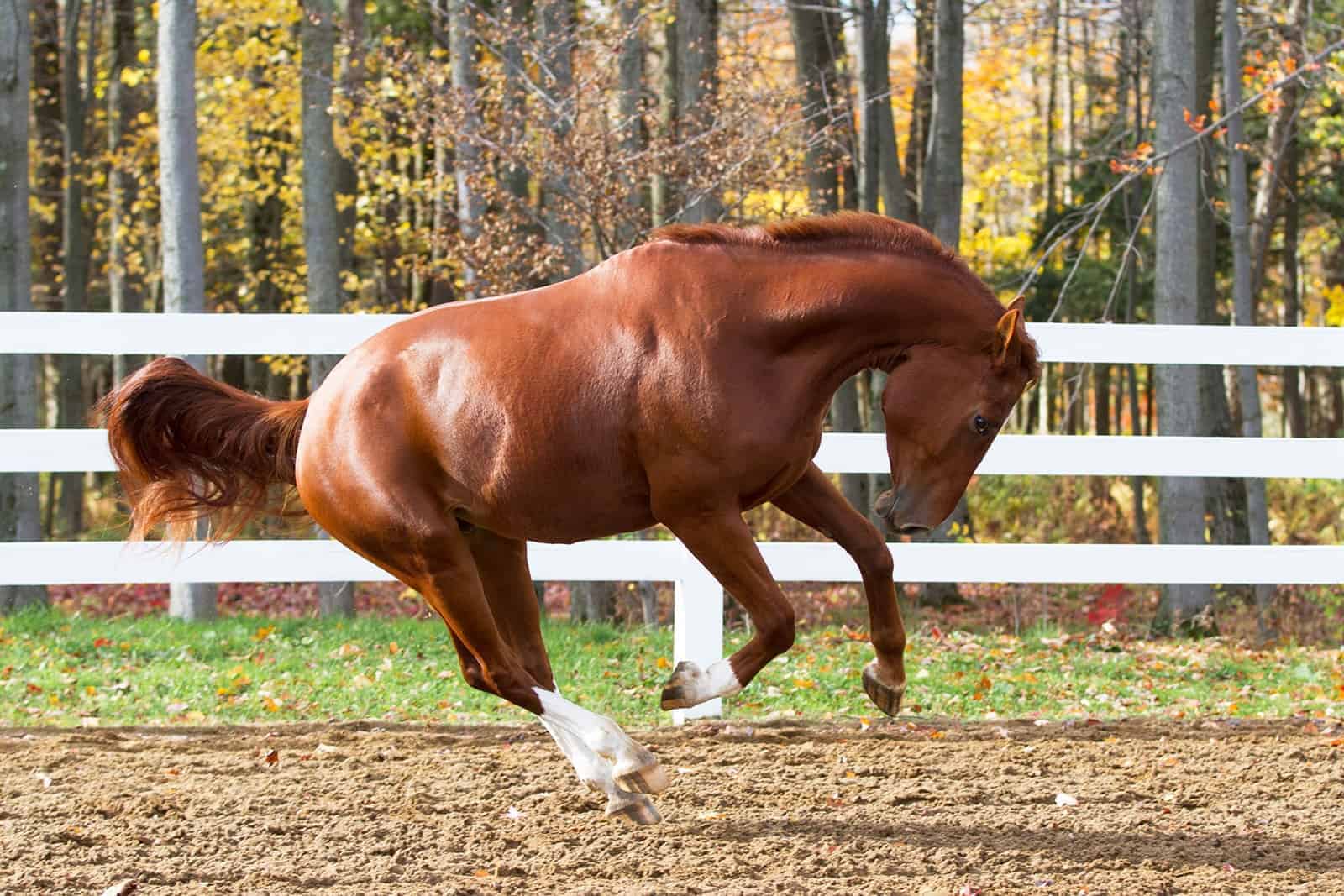 Skippy was almost aptly named. He didn’t skip, but he did hop and jump. And to his owner’s great regret, Skippy bucked.

“He was a horrible ride,” recalls Amber Cash of Newark, Delaware. “He kicked, he bucked, he bit, he would run and not stop. I thought I could train it out of him, but he always seemed angry.”

Skippy wasn’t always like that, though. Often—and especially when he didn’t have a rider—the big red gelding was delightful, which made Cash suspect his bucking was pain-related. “He was loving, funny, smart, and playful,” she says. “But when he hurt, he was a holy terror.”

Cash tried dozens of saddles, stretching techniques, and chiropractors, all to no avail. It wasn’t until she got his back radiographed that she discovered the tips of her horse’s backbone were running into each other—a condition known as kissing spines. After surgery to create more space between the vertebrae, Skippy was a changed horse. “He was so much happier and easy to ride,” says Cash.

A few other herbivores, such as sheep and antelope, have a certain kind of buck, she says. But the equine buck takes the skill to new heights: Their leaps into the air, with two or four legs off the ground, sometimes combined with either an arched-up or stretched-out back, the head low, and/or sudden stops and twists, could pitch off just about any animal—­including humans.

What Kind of Buck Is It?

Not all bucks are created equal, says Dyson. Some include little hops with the upper back—the thoracic spine, from the wither to the loin—in extension and the head up; some involve full flying leaps with the back up and the head down (“pronking” or “crow-hopping”); some propel rapidly forward in a series of pronks (“bronking”), often with lots of stops and twists.

“I always ask my clients, ‘Do you feel the horse is trying to buck you off?’ ” Dyson says. “If they say no, that’s a completely different situation from the horse that does the kind of rodeo act when its back is in flexion all the time.”

Our sources agree that most horses that buck consistently merit a visit from the veterinarian. Even if your horse isn’t throwing you off, his body language is likely telling you something’s wrong, and he needs help.

We’ve listed nine reasons horses buck—most of which are pain-related. Bucking seems to be a natural equine response to pain, although the biological reason for that remains unclear. “We can’t necessarily say it’s pain relief, but it’s definitely a reaction to pain,” says Dyson.

The No. 1 thing I look for in bucking horses is kissing spines.

When the long points sticking up from the top of vertebrae—known as spinous processes—crowd each other, they’re said to be “kissing.” Bone hitting bone is painful, especially with added pressure from a rider, says Beau Whitaker, DVM, of the Brazos Valley Equine Hospital, in Salado, Texas. “The No. 1 thing I look for in bucking horses is kissing spines,” he says.

Kissing spines in the saddle area (the caudal thoracic and the lumbar spines) are the most likely to cause discomfort that can lead to bucking, he says. “When you get on the horse, it causes the back to drop and the spine to ventroflex (extend), and that pushes those bones even closer together, causing more pain, so the horse starts to buck.”

Not all horses with radiographic evidence of kissing spines, however, display signs of pain such as bucking.

The large, rigid sacroiliac joints lie between the ilium of the pelvis and the sacrum (the vertebral column from the loin to the tail—also considered a part of the pelvis) and are supported by ligaments above and below. Through wear or injury, horses can damage these joints and ligaments—and the result is often a very telltale kind of buck, says Dyson.

“They usually only buck when ridden, not on the longe,” she says. “They buck with their back extended, most commonly in canter, and may kick out backward or sideways. As a rider, you don’t feel like they’re trying to get you off.”

Her recent postmortem work for a soon-to-be-published study has shown that some of these horses even have a damaged obturator or sciatic nerve, which could lead to neuropathic pain (caused by damage to specific nervous system regions that perceive pain).

Bucking-related pain can also come from the stomach, says Whitaker. Sixty to 90% of adult performance horses have gastric ulcers, which develop when digestive acids break down the stomach lining, often due to stress, large amounts of concentrate feeds, and/or long breaks between meals.

“Some horses get enough pain from gastric ulcers that when they’re moving, especially cantering, that acid starts to splash around and irritate them, making them buck,” he says. Gastroscopy is the only way to confirm a horse has ulcers, so it’s a useful procedure when other pain has been ruled out.

A saddle that’s incorrectly fitted or badly positioned on your horse’s back can concentrate high pressures in a small area or pinch, such as just behind the withers, Dyson says. Some horses have a “bucking spot” behind the saddle: Firm pressure to this area might trigger bucking.

A broken tree can also cause a horse to react, says Whitaker, as can a poorly fitted saddle pad or tack such as breastplates, bridles, and bits.

Girths can also be culprits, says Dyson, particularly those with elastic inserts. Some horses might find the moving elastic uncomfortable.

5. Other Sources of Pain

Bucking-associated pain can come from all over the body, our sources say. For example, they’ve found it in the pelvis, limbs (especially the hocks and stifles), and ribs. “Lameness may be the cause of bucking,” says Dyson.

Or it might come from the other end of the horse: “Sometimes they’ll have a hook or a fractured tooth,” says Whitaker. “This can hurt more when they get their heads in a certain position. Often those horses will throw their heads, but we do see some that manifest in ways you wouldn’t expect, like bucking.”

Dyson says she has seen bucking related to a torn ligament in the back, spondylosis (degenerative bone changes) of the spine under the saddle, and a broken sternum, among other orthopedic issues.

In some circumstances, the consequences of a horse’s buck—namely, the rider falling off—can scare them. “You see some horses, when they’ve bucked the rider off, they just stand there and act absolutely astonished and fearful,” Dyson says. “They are often terrified of being remounted, (and they may especially) not tolerate the rider sitting upright.”

This doesn’t mean the horse is afraid he’s “done something wrong,” which is too anthropomorphic, she says. Rather, the horse is fearful of having a mass projected over its head.

Whether they’re frightened or anticipating pain, or they just don’t like being ridden—maybe due to previous bad experiences—some horses learn that strong bucking gets rid of the rider and any related pain. That relief is a strong reward, and they learn to buck to get it.

Even after veterinarians perform therapy to relieve a bucking horse’s pain, he might continue to buck because he learned to when it hurt to be ridden. “Unless something changes, like an intervention from a behavioral management point of view, you may get into a situation which spirals out of control,” Dyson says.

Unskilled riders can start the spiral, she says. Riders with poor balance might bounce a lot (causing pain) and eventually fall with a simple buck. And some horses develop a tendency to buck early in a riding session, which could be the result of having quickly dislodged novice riders.

Learned bucking is often more difficult to resolve than pain-related bucking, our sources say. “Sometimes you have to try to work those horses through the mental aspect of it, once you get past the pain aspect,” Whitaker says. “And that’s not always easy to figure out.”

It’s worth mentioning, of course, that some horses are purposefully trained to buck. “Certain lines of horses, from a rodeo performance point of view, are apparently better at bucking,” Dyson says. Usually, when they don’t have cinches around their groin, they won’t buck, she adds. However, they might have a greater propensity for it.

Meanwhile, some high-level dressage horses, such as from the Spanish Riding School in Vienna, Austria, are taught bucklike movements such as the capriole.

Bucking can represent both negative and positive feelings. Horses buck out of exuberance when galloping and playing at pasture and sometimes under saddle, says Dyson. “They can feel fresh and exuberant, like when you take them out to the beach to gallop, and they give some happy bucks,” she says.

There’s a stark difference between the happy buck and the buck that says something’s wrong, however. Feel-good bucks are usually one-shots in specific situations of excitement, whereas bucks in a series or that happen every time you ride should raise a red flag.

Happy bucks aren’t usually an issue—unless you’re not skilled enough to ride them out, Dyson says. However, horses can be trained to not buck under a rider, even when they’re exuberantly happy.

If you’ve got a bucker, get your horse—and your tack—evaluated. Have a master saddler check your saddle and bridle, and ask your veterinarian to run a buck evaluation. That usually starts with palpating the back to check for reactions to pain, followed by radiographs and, if necessary, a gastroscopy, says Whitaker.

Veterinarians should also evaluate the horse in hand, while longeing, and under saddle (if he’s safe to ride), says Dyson. Local (temporary) nerve blocks can help find the part of the body that’s hurting.

Sometimes veterinarians perform an ultrasound of a painful area to see if the soft tissues have been affected. If those checks don’t lead them to the problem, practitioners might pursue bone scans (scintigraphy) to look for inflammation in the bones. Bone scans can help veterinarians track improvement once horses have started therapy, Whitaker says.

Treatment must be targeted depending on the diagnosis, says Dyson. Most horses also need behavioral retraining after they’ve recovered physically, to learn not to buck once the pain is gone. Seek the help of a certified behaviorist or a trainer versed in positive reinforcement methods.

Bucking might be what happy horses do in a field, but it can spell trouble when they’re doing it repeatedly under saddle. Veterinary treatment and behavior management can help resolve the issues behind the buck, our sources say. And when you identify the reason for the buck—like Cash did for Skippy—it can be a game-changer for both horse and owner.