Understanding how your growing foal’s digestive system works can help you recognize and avoid potential problems. 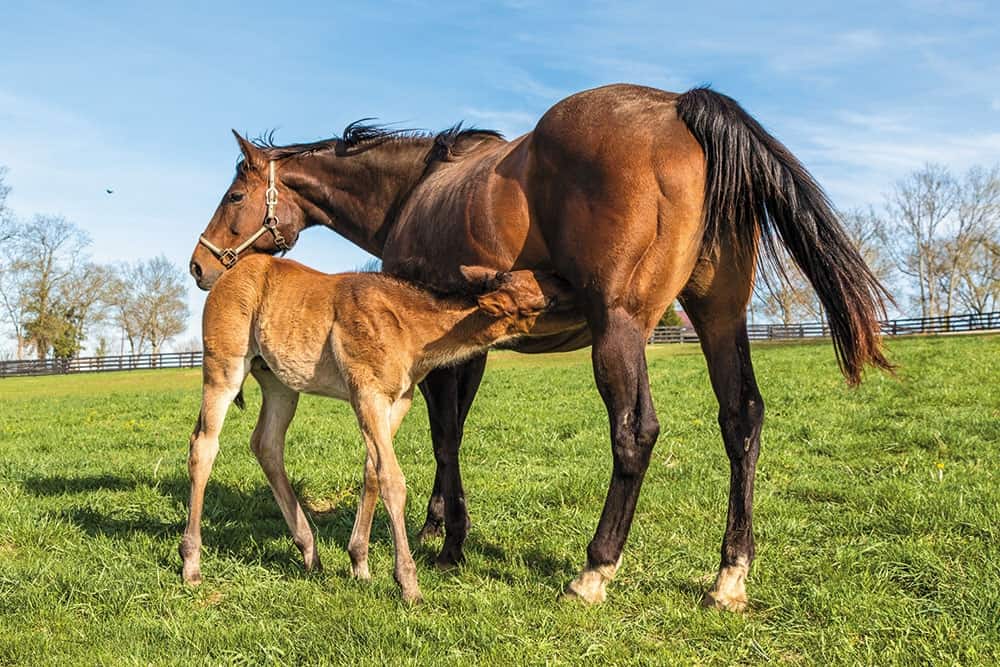 Understanding how your growing foal’s digestive system works can help you recognize and avoid potential problems.

Priming the young horse’s digestive tract for healthy growth and development takes careful planning, observation, and sometimes intervention. Owners and managers of young horses must ensure adequate colostrum intake and passive transfer of immunity at birth, reduce stress and resulting gastrointestinal (GI) illness at weaning, and meet the nutritional requirements associated with times of rapid growth along the way. But they must also hone in on what’s going on with the inner workings of this delicate system, which must be healthy to support development of pathogen-fighting intestinal microbes, accommodate a changing diet, and ward off gastric ulcers. And all of this comes at a time when the young horse might also be coping with challenges of intestinal parasites, a developing immune system, and dental changes.

At birth the foal’s digestive tract shifts from placental to enteral nutrition, meaning he begins to get his nutrients via the GI tract. This shift is a catalyst for a variety of physical, physiological, and microbial changes. Within the first 24 to 48 hours of life, pores in the small intestine lining can absorb large proteins, such as antibodies from the mare’s colostrum (first milk), but after this brief period the pores close.

At birth the foal’s digestive tract is about 6 meters (20 feet) long, and by adulthood it will extend more than 25 meters (about 82 feet). To stay on pace, the GI tract’s components take turns expanding; in the first 16 days of life the small intestine develops rapidly. Then the large intestine (cecum and large and small colon) sees its greatest development between 2 and 6 months of age, at a time when the foal typically is transitioning from mostly milk to a diet with increasing forage.

Foals can develop digestive issues right from the start. Neonatal foals are at risk of meconium impaction, or blockage of the colon with the first passage of manure, explains Anthony Blisklager, DVM, PhD, Dipl. ACVS, professor of equine surgery and gastroenterology at North Carolina State University’s College of Veterinary Medicine. “They will become colicky as they get bloated, and an absence of feces is an indication for an enema. If foals continue to have problems, more aggressive medical or even surgical treatment is a consideration.”

Foals can develop diarrhea for a variety of reasons. This condition is of concern to owners/breeders because it can quickly cause severe dehydration, shock, and even death. Further, it can weaken the immune system, making foals susceptible to other pathogens.

The actual physical process of foaling will expose the foal to the proper environmental bacteria from the dam’s vagina, feces, and saliva.
Dr. Debra Powell

“The actual physical process of foaling will expose the foal to the proper environmental bacteria from the dam’s vagina, feces, and saliva (when she licks him),” explains Debra Powell, PhD, PAS, head of the equine program at Hocking College, in Nelsonville, Ohio, and Owner of Powell’s Equine and Canine Therapeutic Services. Another way he acquires them is by consuming his dam’s feces within a few days to weeks of birth.

There is a fine balance between the colonization of “good” and “bad,” or pathogenic, microbes, and if the scale tips toward the bad, the foal can be more likely to develop diarrhea. Troublesome organisms for foals include Salmonella, Escherichia coli, Clostridium difficile, and C. perfringens, which they can acquire directly from the mare through the methods described, or also the environment.

To prevent foals from ingesting other diarrhea-causing organisms, such as the internal parasite species Strongyloides westeri (threadworms), Powell recommends deworming the mare either immediately after foaling or within 24 hours.

Proper vaccination of the mare and foal (once he’s old enough) can also help prevent many diarrheal diseases. Rotavirus is a particularly nasty virus that spreads easily within a facility and causes diarrhea and anorexia in foals. One of the first signs of disease is a full udder—and a mare’s discomfort from this—due to the foal’s lack of nursing. In addition to suffering the untoward side effects of diarrhea, the anorexic foal won’t be taking in his required nutrients.

Another type of diarrhea that can occur in foals is known as foal-heat diarrhea, because it arises when the mare comes back into season—typically when the foal is 7 to 10 days old. “However, ‘foal heat’ likely doesn’t have that much to do with it,” says Blikslager. “Rather, it is the early development of (bacterial flora in) the foal’s colon, where adult fermentation of forage will ultimately take place.”

These microbes can impact how the foal absorbs water, resulting in diarrhea. This problem generally isn’t serious, but call your veterinarian if clinical signs last more than three days or coincide with fever.

Researchers have recently begun investigating the use of prebiotics or probiotics for foals, with the goal of facilitating a healthy microbial environment in the gut. While early study results have shown that the products might be beneficial, our sources say there is no need to run out and purchase them just yet. In fact, Blikslager “does not generally recommend pre- or probiotics for foals, which essentially manage their own intake of ‘gut bugs’ by being with their dams, with fresh manure in the vicinity. However, if foals develop diarrheal disease, particularly at an early age, probiotics become an important consideration in an attempt to restore some balance within their gut.”

As foals begin consuming creep feed and forage around the time of weaning, the digestive tract changes further. The intestines prepare to handle larger volumes of digesta, and the microbe populations shift to those more readily able to ferment fibrous particles.

The shift from milk to feed and forage can predispose foals to gastric ulcers and colic, particularly of they are consuming high-grain diets (think youngsters being readied for sales or futurities). In a University of Illinois study, researchers found that weanlings were more likely to have gastric ulcers when fed hay and grain or a pelleted complete feed than if they consumed alfalfa hay alone.

These problems can also reflect the management of weanlings fed grain-based diets. “Ulcers in the foals that I see occur in larger breeding operations where the mare and foal or weanlings have limited time out and, therefore, stresses on the foals or weanlings may be higher,” Powell notes. “I usually recommend as much pasture turnout as possible and unlimited or at least increased access to grazing grass and eating good- to high-quality forage.”

While some grain might be necessary to meet a young horse’s increased growth demands, maximizing high-quality forage intake will help his digestive tract, as well as its microbial population, continue to develop properly while warding off ulcers.

Another digestive issue for growing horses is their teeth. Typically, foals are born with their deciduous (baby) first central incisors and premolars, or they arrive within the first two weeks after birth, and the additional incisors come in by 6 to 9 months of age. The permanent incisors, canines (they’re typically only present in male horses, if at all), premolars, and molars continue to erupt and replace the deciduous teeth over the next couple of years, starting at about age 2 ½. The first permanent molars come in by 1 year, and the other molars appear at 2 and 4 years of age. By the time a horse is 5, he should have all of his permanent teeth, and they should be “in wear,” meaning the surfaces can meet and grind.

This incremental dentition can pose challenges for young horses because as teeth come in, they might prevent proper grinding. Thus, younger horses should always eat easily chewed feeds; good-quality, leafy forages (vs. harder, stemmier forages); and, if consuming any whole cereal grains, processed grains. For example, rolled oats or cracked corn would be preferable for younger horses over whole oats or corn (though, of course, any of those should be fed as part of a balanced diet and in moderation to avoid starch overload).

Inspect newborn foals for congenital problems such as an overshot jaw (parrot mouth) or undershot jaw (monkey mouth)—two conformational issues that affect how horses chew and grind forage and feed throughout life.

Yearlings’ bodies have even higher nutritional demands, so some owners feed high-grain diets. But it’s important to note such diets might increase these animals’ risk of developing colic.

“Young horses that are consuming high singular intakes of concentrates may succumb to starch overload,” Powell says. Based on her experience, she adds, “I know there is the propensity to feed high-fiber/high-fat feeds that are now available, but if you feed your young horses in moderation (i.e., small meals—no more than 0.5 kg per feeding for a young horse—more frequently), there is really nothing wrong with feeding the traditional commercial ‘sweet’ feeds that are formulated for young horses.”

But for young horses maintained on twice-daily feedings, Powell says she recommends feeding commercial feeds that have higher fermentable fibers and fats rather than sweet types of feeds that are higher in cereal grains such as oats.

Higher starch and sugar diets can also cause structural development problems. “These feeds can cause the young horses to literally grow too rapidly, causing problems with conditions such as OCD (osteochondritis dissecans and poor bone and cartilage development) or flexural limb deformities (e.g., club feet).”

Young horses are also more susceptible to internal parasite infection, both from high ascarid (roundworm) and cyathostome (small strongyle) infection loads, which can block the GI tract and cause colic. “Foals that are impacted deteriorate much more rapidly than adults,” Blikslager says. “This is particularly notable with foals that have roundworm impactions. These foals have typically not been appropriately dewormed starting early in life (6-8 weeks) and then are dewormed as weanlings (at 4-6 months). Roundworms are particularly large and readily block the gut when killed. This condition almost always requires emergency surgery.”

Owners should work with their veterinarians early on to develop a targeted internal parasite prevention program for their foals and young horses.

To promote digestive health in your young horse, keep the mare and foal in a clean facility to allow normal colonization of microbes in the foal’s intestine and to ward off pathogens. Work with your veterinarian to build a strong preventive medicine program for your foal, including proper vaccination and deworming protocols. And, finally, offer a proper diet: High-quality forages will help your young horse’s digestive tract develop, and concentrated feeds in several small meals per day will balance out his ration for optimal growth. Shannon Pratt-Phillips, PhD, received her Master of Science from the University of Kentucky and her Doctor of Philosophy from the University of Guelph, focusing on equine nutrition and exercise physiology. Pratt-Phillips joined the faculty at North Carolina State University in 2006, where she currently teaches equine nutrition in the Department of Animal Science. She is the director of the Distance Education Animal Science Programs, which includes the Master of Animal Science program, and her field of research focuses on glucose metabolism, insulin resistance, obesity, and laminitis prevention and management in horses.

Beautiful and very sound mare with trail, dressage and jumping experience. Looking for a home because she doesn’t like the…
01/09/2023
Total views: 621