What’s in Your Horse’s Joint Supplement?

With so many supplements to choose from, it’s important to know what options are effective. Here’s a look at supplement ingredients that are backed by science. 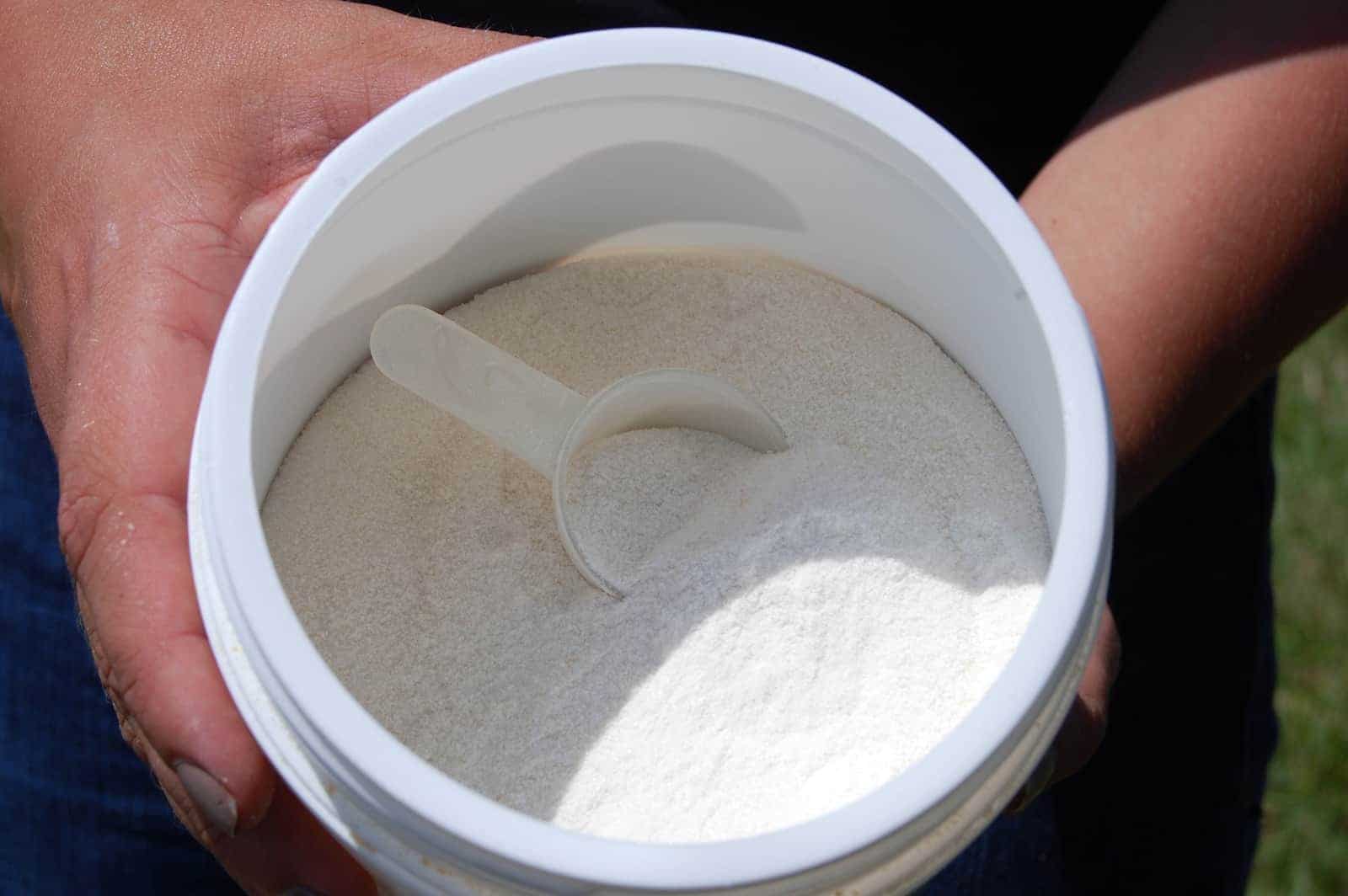 Can you name one of the most common causes of lameness in horses? If you said osteoarthritis (OA), you’re right. As common as it is, OA remains an incurable disease, and once it presents itself in a joint, there’s no going back.

Knowing this might cause you to sprint over to the supplement aisle of your local feed or tack store, only to be met with an overabundance of oral joint supplements, each label touting an ability to prevent or slow OA progression. But, believe it or not, most of these supplements’ ingredients have no scientific backing in horses, with label claims relying on data extrapolated from research performed in humans and other animals. So which oral joint ingredients do have published results specifically in horses? Let’s find out.

Glucosamine is an amino monosaccharide (sugar attached to the amino acid glutamine). Chondroitin sulfate is a glycosaminoglycan (GAG), an important component of articular (joint) cartilage.

Researchers have performed many in vitro (in the laboratory, on tissue samples) studies to better understand glucosamine and chondroitin sulfate’s mode of action at the cellular level, either alone or combined. Note that unlike in vivo studies performed on living animals, these experiments do not precisely mirror the conditions found in nature. One involved corticosteroid joint injections, which veterinarians commonly administer to promote joint health. However, some corticosteroids can inhibit proteoglycan (basically a chain of GAGs with a core protein molecule) production, negatively affecting articular cartilage. At the University of Illinois in 2008, Byron et al. found that glucosamine helped protect proteoglycan production when the cartilage was exposed to a corticosteroid.

Another team of MSU researchers took articular cartilage from cadaver limbs and exposed it to mechanical impact to simulate a joint injury. By culturing the cartilage with a combination of glucosamine and chondroitin sulfate (GC), they concluded that GC could help mitigate some of the inflammatory response following joint trauma (Harlan et al., 2012).

Outside of the lab, Martha Rodgers, VMD, of Shephard Hill Equine, in Kentucky, followed 10 hunter/jumper and eventing horses for eight years in a published field study looking at a glucosamine and chondroitin sulfate supplement’s effects on hock injection frequency. Before starting on the supplement, the horses averaged 1.7 joint injections per year at 6.8-month intervals. During the six years they consumed the supplement at the manufacturer’s recommended dose, the horses’ average number of joint injections dropped to 0.85 every 9.98 months. Rodgers did note that six to eight months of consistent GC supplement use is necessary prior to seeing results. It’s also important to note that the level of evidence in this small-scale study is not as strong as that of a placebo-controlled and blinded trial.

In 2009 at Murray State University, also in Kentucky, researchers evaluated horses’ arthritic pain after 150 days of oral GC supplementation and found it did, subjectively, reduce overall pain at a walk and trot and after flexing an arthritic joint.

Methylsulfonylmethane (MSM) is a naturally occurring organosulfur compound in the same family as dimethyl sulfoxide, more commonly known as DMSO. It is a white powder, whereas DMSO is liquid at room temperature.

Little is known about MSM’s mode of action, but scientists believe it plays a role in glutathione (an intracellular antioxidant critical in preventing cell damage) synthesis.

At the University of Madrid, Spain, researchers evaluated 20 actively competing show jumpers to determine if oral MSM supplementation would alleviate exercise-induced oxidative stress (Basically, this is what happens when the horse “burns” energy, and a few unstable oxygen molecules called free radicals, with an unpaired electron, are formed. The unpaired electron makes them quick to react with other molecules, damaging them and cell walls.). The results? Horses receiving MSM for seven days prior to competing showed fewer exercise-related indicators of oxidative stress and higher levels of the enzyme glutathione peroxidase, an antioxidant, in all blood plasma samples taken over the 35-day period. The team concluded that MSM could play an important protective role and, thus, increase performance in sport horses (Maranon et al., 2008).

In a 2006 study Bergin et al. prescribed a 30-day postoperative treatment with an oral gel either with or without hyaluronan to 48 Thoroughbred yearlings that had undergone arthroscopic hock surgery to remove osteochondritis dissecans lesions. Yearlings receiving the HA treatment had less joint swelling than those receiving the gel without HA.

In a recent in vitro study, veterinarians at The Ohio State University (OSU) cultured synovial cells with HA for 24 hours and challenged them with the ­pro-inflammatory agent lipopolysaccharide to stimulate an immune response. With the addition of HA, synovial cells appeared to be protected from the lipopolysaccharide’s negative effects: More of them lived,  fewer were damaged, and inflammatory marker concentrations were lower (Kilborne et al., 2017). Resveratrol is a compound produced by plants, such as grapes, in response to injury or disease.

Resveratrol has antioxidative, anti-apoptotic (prevents cell death), and anti-inflammatory effects in humans and other mammals.

Fish oil is a polyunsaturated fatty acid (PUFA) derived from cold-water oily fish such as mackerel or herring. “Aggrecanases (enzymes that break down proteins) contribute to proteoglycan loss in articular cartilage, and (their) activity has been shown to be elevated during OA in horses,” Jones says. Therefore, reducing ADAMTS-4’s activity during inflammation might help protect the joint cartilage, she says.

These findings might also indicate that the supplement has chondroprotective properties in healthy joints with mild synovitis. However, “we only measured gene expression, not protein expression,” says Jones. Further studies are needed to determine if oral supplementation of omega-3 fatty acids does alter aggrecanases’ concentration.

The New Zealand green-lipped mussel (Perna canaliculus) is a large shellfish that thrives in that country.

Green-lipped mussel extract is another PUFA that’s naturally high in omega-3 fatty acids. Although its exact mode of action is not known, researchers believe the extract has anti-inflammatory properties.

These are a combination of unsaponifiable oil extracted from avocados and soybeans.

Researchers at CSU induced osteoarthritis in 16 horses’ knee joints. Half received the ASU orally in ­molasses, and half received molasses alone as a placebo. The ASU did not alter signs of pain or lameness but did reduce articular cartilage erosion and increase GAG synthesis (Kawcak et al., 2007).

In the aforementioned OSU study, when researchers cultured synovial cells with a combination of HA and GC and subjected them to lipopolysaccharide, they observed significant suppression of inflammatory markers versus when they cultured with HA alone (Kilborne et al., 2017).

In summary, limited published research exists on oral joint supplements and their effects in horses. Given the minuscule amount of science available, what would nutritionists and veterinarians suggest for joint support?

Oral supplements must be given daily to work effectively. For owners who don’t see their horses every day or don’t have services at their barn to provide feedings, oral supplements might not be the best choice.

The joint supplement ingredients that will be most effective depends on the individual horse. Miller says each supplement, be it glucosamine, chondroitin, MSM, or hyaluronic acid, generally acts as an anti-inflammatory in the body.

“Inflammation is a complex physiologic phenomenon, orchestrated by literally hundreds of chemical mediators,” he says. “No inflammatory profile is exactly the same between animals.”

For instance, one horse’s inflammation might be governed heavily by ­prostaglandins, another by leukotrienes (both of which are types of inflammatory mediators). Also, some joint supplements have anti-­inflammatory affinities for different inflammatory ­mediators.

“So, glucosamine may do a great job on the prostaglandins while hyaluronic may knock out some of those leukotrienes,” says Miller. “It all just comes down to each horse.”

As far as PUFAs, “there is sustainable evidence in other species and limited information available in horses that support the anti-inflammatory properties of the omega-3 fatty acids EPA and DHA,” says Jones, “and supplementation is necessary to get the highest concentrations possible for the horse. Adding these to a joint supplement may be beneficial due to documented anti-inflammatory ­properties.”

Bottom line: Incorporating a joint supplement into the horse’s feed regimen early in life is far more beneficial than starting a joint supplement after the horse begins showing signs of problems, says Miller. This is because we do know from research that these types of products do much more to prevent joint problems than to treat existing ones. Work with your veterinarian to determine what’s best for your individual horse, and always obtain supplements from a reputable source to prevent side effects and ­toxicities.

Beautiful 2 year old Clara is now available for adoption by an experienced horseman/women who wants to bring up a…
08/12/2022
Total views: 2326