The outer hoof’s health affects the bones and soft tissues within, and vice versa. 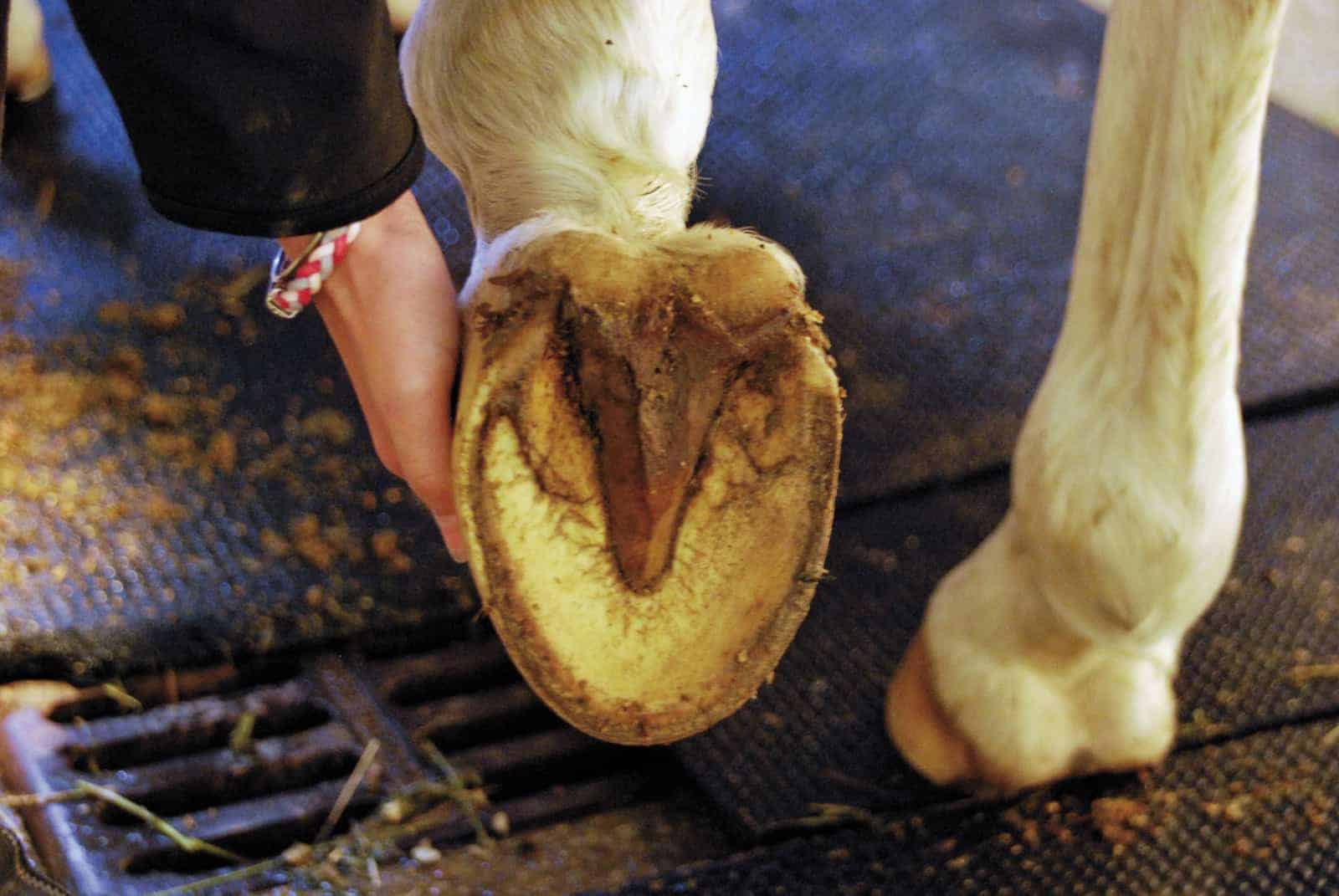 The hoof’s external health affects the bones and soft tissues within, and vice versa

Many horse owners go their whole lives caring for horses’ hooves with little knowledge of the hoof capsules’ inner workings—the interaction of the bones, tendons, ligaments, and other parts that lie beneath. They might be aware of how the hoof’s outer condition reflects its external health, but the hoof’s appearance also provides a wealth of information on its internal well-being. It’s much more than just a covering for the end of the limb or the equine equivalent of the human fingernail.

When you look at the hoof as the horse stands, you are seeing the hoof wall. It grows down from the coronary band, the junction between the hoof and the skin. The toe is closest to the horse’s nose, the heels are closer to his tail, and the quarters are between.

If you pick up the hoof to look at the bottom, you will see the wall wrapping around the outer edge and the white line just inside of it (easier to see in a freshly trimmed foot). Moving rearward from the toe, you’ll find the sole that covers the majority of the hoof’s bottom. There is also a triangular elastic structure pointing forward from the heels called the frog (which aids in shock absorption). In the center of the frog and on either side are grooves called the central and lateral sulci. Lastly, we have the heels directly behind the frog and the bars at the rearward ends of the hoof wall, where the wall turns inward and then forward away from the heels.

Aside from looking for obvious injury, “Visual examination of the foot—its growth pattern, shape, and external characteristics—hints at internal areas of the foot that bear more ‘load’ or stress (and, thus, need unloading),” explains Rucker.

Increased stresses on parts of the hoof can have three results:

The hoof doesn’t exist in a vacuum, however—O’Grady encourages owners to also consider limb conformation, which can change how forces are distributed within the hoof capsule, leading to hoof wall deformation.

Let’s start with the problems that involve damage and disease of outer structures, then we’ll move on to problems related to hoof balance. RELATED CONTENT: A Nail in the Hoof: What Would You Do?

With puncture wounds from stepping on a nail or similar sharp object, the real risk isn’t the hole, but the expressway it provides for bacteria to get deep inside the body and cause infection. Rucker strongly recommends leaving the object in place if possible until the veterinarian can radiograph (X ray) the foot to see what internal structures are affected.

Scarring from coronary band damage can cause altered hoof growth below the injured area for the rest of the horse’s life.

“These injuries need to be bandaged and treated to restore alignment of hoof tubules for healthy future growth,” Rucker advises.

Minor chips, cracks, and missing chunks of wall might be nothing to sweat over, but more serious damage such as deep quarter cracks and large missing pieces of hoof can be much more painful and problematic.

“If you have a large chunk of the hoof missing with bleeding, have a vet out because the horse may need a pressure wrap to keep the wall from bulging and regrowing incorrectly,” says Rucker. “The vet can also radiograph quarter crack cases to help the farrier treat them,” based on any internal damage that might have happened.

Visual examination of the foot hints at internal areas of the foot that bear more load or stress.”
Dr. Amy Rucker
Abscesses are pockets of infection (like pimples) that can break open at the thinner coronary band area or rupture through the sole/white line. Once the abscess bursts, lameness improves immediately because of the reduced pressure.

“Anytime a horse is non-weight-bearing lame, I worry about a fracture or septic (infected) tendon, but it’s usually an abscess,” says Rucker. “They’re horribly painful, and (a non-steroidal anti-inflammatory such as) phenylbutazone (Bute) won’t resolve the pain.”

White line disease is an opportunistic fungal or bacterial infection that strikes where the wall is already stressed or cracked, softening the inner hoof wall so it crumbles and allows outer wall layers to detach.

“You have to remove enough wall to get air to affected areas (to help kill the microbes breaking the wall down), support the remaining foot with a special shoe, and lay the horse off while the wall regrows,” says Rucker.

Thrush, a bacterial infection of the frog and sulci, can be caused by a dirty/wet environment, says Rucker. But that’s not always the case; other causes include anything that impairs the horse’s natural hoof-cleaning mechanism—continuous changes in the hoof’s inner structure, aided by movement, that keep the horse’s foot clean. “Keep affected feet dry and clean and the frog trimmed so you can get air and medications down into the sulci,” she says.

Now let’s move on to hoof problems tied to the internal structures. In most mild cases, Rucker notes, the horse can return to soundness, but the more severe the problem, the greater the chances it will become long-term.

Club feet, caused by overly tight deep digital flexor tendons, have a steep toe angle and often a more horizontal coronary band when viewed from the side. The hoof-pastern axis is broken forward (hoof steeper than pastern), and the hoof might flare at the toe as a result of the tendon pulling the toe of the coffin bone down and rearward.

These features are similar to what’s seen when the coffin bone has become unstable and rotated downward at the toe from chronic laminitis, O’Grady adds. Both club footed and laminitis-affected horses exhibit a high palmar angle (heels of the coffin bone are significantly higher than the toe).

“If the white line is stretched at the toe, the case is more severe,” Rucker notes. “If radiographs show bone damage from the increased pressure on the toe, it’s harder to keep these horses sound.”

Long toe/low heel is the opposite of a club foot; if the hoof-pastern angle is broken back, the horse probably has a long toe and low heel. The long toe puts a lot of leverage on the heels, crushing them even to the point that the hoof tubules are horizontal (parallel with the ground). Horses with such heel conformation typically have a poorly developed digital cushion and thin collateral cartilages, says O’Grady.

Rucker adds that affected horses usually have a negative palmar angle, heel pain, and might develop navicular and coffin joint pain from the abnormal stress applied to those structures.

Sheared heels occur when the coronary band is higher in one quarter/heel area of the hoof than the other, says O’Grady. This can result from compressive stress (the wall could be too long in that area) and is frequently accompanied by narrowed growth rings. The higher heel is also more prone to vertical quarter cracks.

Thin soles can be caused by genetics and/or overtrimming. Rucker explains that horses with thin-soled feet often have flat soles (no cup) and an overly thin wall. “These feet often have nail holes and growth rings close together because the foot just isn’t growing well,” she comments.

Laminitis, if severe or chronic, can alter hoof growth. O’Grady explains that chronically laminitic feet usually have wider growth rings at the heel than at the toe (because the damage tends to be worse at the toe, compromising growth there more severely than at the heels).

Rucker adds that the dorsal wall and white line can widen at the toe as the attachment of the hoof to internal structures collapses and the hoof tubules begin to grow outward.

Keep your horses sound by watching their feet for small changes on the outside that could indicate problems are brewing on the inside. Prevention or early detection are far simpler, cheaper, and more effective than treating lameness or injury.

“Understand the challenges of each limb and hoof’s conformation and manage the foot for maximum soundness with that conformation rather than conforming to a ‘perfect’ standard,” says Rucker. “Everyone tries to get their horses’ feet to look pretty and perfect, when having functional feet with plenty of mass is much more important than having pretty feet. (With the latter) the owner is happy, but the horse isn’t.”